Bender did indeed make an appearance in TSTO!
Alas, only in a series of dialogues. None-the-less, I’m still totally stoked about it 🙂 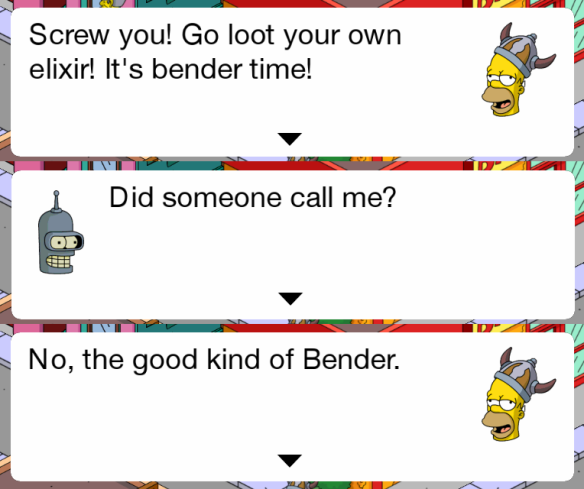 Sorry Barbarian Homer, but I must reluctantly disagree with you.
Bender Bending Rodríguez is definitely the good (make that “the best”) kind of Bender.
Once-upon-a-time (in my boozier years) I might have sided with you.
However, now, I just want Futurama to ‘live on’ in some form or the other ~ and this is a very good start.

My friend Chris J made a post on TOuk that has gotten me so excited that I felt compelled to add a post to this blog, which I rarely do these days. That should give some indication as to how fired-up I am about this. Chris was letting us know that ‘The Legendary’ spAnser has posted (on TSTONews) that an icon of Bender has been added to the game files with the ‘Medieval Times’ update.

Oh please let this be a sign that that the upcoming Simpsons/Futurama crossover will include an Episode Tie-In for TSTO.

END_OF_DOCUMENT_TOKEN_TO_BE_REPLACED

Back in late October I posted about what could have been (speculatively) perceived as a reference to Futurama in The Simpsons Tapped Out.

Good news everyone! We now have an unmistakable Futurama content sighting in TSTO.

As part of the Holiday 2013 update… in the quest ‘Too Much of a Good Thing’ Part 10 where many Springfielders are tasked to eat out at restaurants; some of them have dialogue pop-ups with various humorous comments about this task.

Will there ever be a FuturamaTapped Out? While it may seem far-fetched at this point ~ I say… never say never!

Numerous sources reported that Matt Groening said (at Comic-Con in July 2013) that there will be a Simpsons/Futurama crossover either as The Simpsons’ Season 25 finale or Season 26 premiere. This would seem to hint that there could, at least, be an episode tie-in for The Simpsons Tapped Out (TSTO).

I for one, would cough-up beaucoup donuts for some Futurama content in TSTO. What might that Futurama content be? Well Bender would be as good a guess as any. The lovable but mischievous, insult spouting, robot is probably the most widely known and recognized character, right meat bags?

Until then, we can still enjoy some wonderful Futurama content in TSTO via the efforts of talented TSTO 2D artists. What is that you ask? It is art created in…

Last night (in the US) the final episode of Futurama aired. Or was it? This series has come back from cancellation before… http://ftotips.com/2013/06/08/oh-cruel-fate-to-be-thusly-boned/   Without getting to spoilery, all I’ll say is ~ if ‘Meanwhile’ was indeed the final Futurama episode ever (as a dedicated fan) I’m satisfied ♥ ♥ 🙂

But I really hope we haven’t heard the last from Futurama… I’ve already read that a crossover episode with The Simpsons is in the works for season 25 (or 26). Here’s the thing… this gets me crazy with anticipation. Once they’ve been in a Simpsons’ episode maybe that makes the Planet Express crew eligible for inclusion in The Simpsons Tapped Out game.

Now for a confession… I enjoy Futurama as much as I do The Simpsons – maybe more, because I’m a huge science fiction fan. Back in June when final new episodes started airing on Comedy Central, I got all fired up about the idea of EA possibly creating Futurama Tapped Out. I even created a whole ‘FTO Tips’ blog just in case.

The problem is, with only 140 episodes compared to The Simpsons massive 530 episodes (so far), I’m not sure if Futurama has a big enough fan-base to support the development of a full Tapped Out game of its own. Not yet, at least. If EA made a Futurama expansion to TSTO (like Krustyland), this would expose Fry, Bender and the PE gang to a tremendous number of TSTO players worldwide. This might stimulate enough interest to then spin-off a full FTO version. I actually proposed a scenario for a TSTO-Futurama expansion in this previous post…
http://drewdabble.com/2013/08/10/upcoming-tsto-tie-ins/ 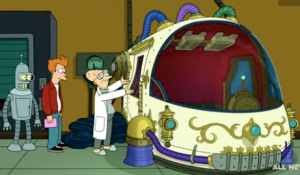 Anyway, Futurama seems to be far from over… I’ve spotted rumors about all kinds of things including a ‘video game’ (maybe FTO?) and more Direct-to-DVD movies. I even saw talk of a full length theatrical movie and possibly even bringing the series back to Fox TV. Take heart Futurama fans, I really don’t believe we’ve heard the last from  Professor Farnsworth and his zany team of misfits. 😀 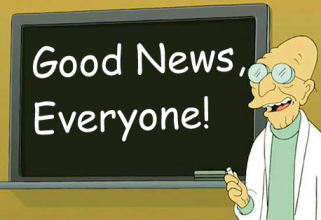 This is an update to my (possibly) misunderstood post… http://drewdabble.com/2013/08/09/we-must-be-cautious/

The pre-takeover TSTO Tips Team is regrouping and can be found here. Hopefully they won’t change the URL again 😉 But if they do, just check back here because I will have probably tracked it down and posted about it. Anyway Mike, Mickus and most of gang are there and hopefully more will be joining soon.

Plus, and this is a BIG PLUS, (also long overdue) they finally have a female voice! Her pen name is minicha or ‘Em Cha’ as she’s known at Tapped-Out UK which is kind-of an online version of ‘Cheers’ (you know, like a pub where everyone knows your n…) Just create a free account and join in on the fun! BTW: Please add an account pic, this helps the more ‘visually oriented’ of us keep track of your shared TSTO insights.

OK, so maybe now I can get back to making this a ‘Multi-Topic’ blog.  Woo Hoo 🙂 To which Professor Farnsworth is a clue (but not in a bad way, like his ‘good news’ usually is on the TV Show)

The new Simpsons TV season is just around the corner. I’m thinking there’s going to be tons of TSTO episode tie-ins. For most of the summer re-run season here in the US, Fox has been hammering the tie-in episodes. Lots of chances for DrewDabble to lament not buying a Moe’s Limo (or three) and The Swanky Fish 😦

What could be next?  Well the upcoming Level 33 (click here for the Spoilers) might give us a clue. So far the seemingly most tangential TSTO character or item, is (correct me if I’m wrong) Honest Abe. http://simpsons.wikia.com/wiki/Abraham_Lincoln and his cabin. However there is the fact that the real Abe did live in the real Springfield (Illinois). Was this supposed to play off of the long running gag about the real location of The Simpsons’ Springfield?

Frankly, I’m open to anything at this point. Went surfing for some ideas and ran across this fantastic site… http://www.antesydespues.com.ar/en/famosos-al-estilo-simpsons/ with a well done and thought provoking list of real-world celebrities that have been seen on the TV show. Here’s four I’d shell out serious donuts for and would be honored to have wandering around DrewDabble’s Springfield. Just imagine a hilarious dual task… Like Nimoy confronting ‘Cosplay’ Comic Book Guy about copyright infringement issues, which by the way – this blog has no intent of, at all – just a fan 🙂

To keep this wishful train of thought rolling just a bit longer…  With Futurama’s final season on Comedy Central finishing up soon, I hope to see some Futurama characters showing up in TSTO. Truth is, what I really want is a full separate Futurama Tapped Out game. Alas this probably isn’t feasible because Futurama just doesn’t have the huge world-wide fan base of The Simpsons. However a good compromise would be to do a Kustyland-like expansion featuring the Planet Express crew.

This could be awesome paired with a Simpsons-Futurama-TSTO tie-in TV episode where Frink is tinkering around in his lab and accidentally zaps himself to New New York in the year 3013. He then runs into professor Farnsworth, who helps him get back to Springfield using his time machine. Then the time machine could become the “Shuttle” to the Futurama expansion.

I could go on for pages with this Futurama stuff (and will in future posts), so I’ll end with this; here’s two decorations I’d buy in a heartbeat…